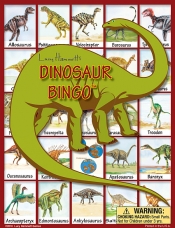 Weighted Score
4.5
Like awkward things?
In this premiere episode of my Growing Up Gamer podcast, I review Dinosaur Bingo, a game my daughter has grown up playing.

Is this game as coarse and unpolished as I am in this first episode? Let's find out as we explore Dinosaur Bingo.

rules comprehension
This game is simply Bingo, with a dinosaur theme applied to it. Each space on a player's Bingo board has a different, random dinosaur. Dinosaurs are selected from a central deck.

The rules are standard Bingo rules. The first player to score five dinos in a row, either orthogonally or diagonally wins.

replay value
This was my daughter's go-to game while she was between three and four years old. Now, at the time of this review, she's six, and this game has started to take a back seat to other, slightly more sophisticated games like King of Tokyo and Survive.

While she was in preschool and kindergarten, there weren't many other games available to us to chose from, so Dinosaur Bingo saw a lot of play. These days it comes up in our rotation less often. She still enjoys playing it occasionally though, so it still has some life left to it.

components
This game's components aren't as cheaply produced as they could possibly be, but it's close. There's three components in the game:

Bingo Boards
The boards are made of a thin cardstock. They're pretty flimsy, but at least they're not so thin that they curl or blow around the table at the slightest breeze.

The dinosaur art is okay. The dinosaur images are cropped and sized differently on the cards than they are on the spaces on the boards, which can slightly increase the difficulty of locating the selected dinosaur on your board.

And the dinosaur featured on the "free" space in the middle of the boards appears to be from a clip art collection. It doesn't match the rest of the art in the game, and adds to the "cheaply made" feel of the game's components.

Score Chips
The scoring chips are simple, plastic little disks. There's not a separate color for each player; they're all blue. But that doesn't really bother me or anyone that I've played with.

It may have been nice to use chips with little pictures of dinosaurs on them for scoring with. (Or even little plastic dinos!) However, that understandably increased production costs for this game, and, instead of the chips, any additional funding should be applied towards the cards instead...

Dinosaur Cards
The quality (or lack thereof) of the cards is my major point of contention with this game. The cards are simply printed tagboard. They're not made of standard playing card materials, and it becomes painfully clear why that's important every time you try to shuffle the deck of dinosaur cards for a new game. For a game that utilizes a deck of cards so heavily, the quality of cards that's included with the game is a disappointment.

One nice thing about the cards is that they have a pronunciation guide and factoids about each dinosaur on the back. So, that's a nice touch, and it's how I learned that I've been mispronouncing Ankylosaurus all these years.

price / value
I've seen it advertised online for as much as $30, but most retailers have it available around the $15 range.

Oddly, we didn't purchase our copy from our usual local game shop. Instead, my wife found this game at a local nursery (the kind that's full of plants, not the kind that's full of babies). It was just stuck in among the zinnias, apparently. Perhaps the mix of pollen and manure in the air was making her feel particularly whimsical. For whatever reason, she bought a copy on impulse.

So, if you're having trouble finding a copy of this game, try checking with your local plant store; maybe they'll have a copy?

We've definitely gotten our money out of this game. Over the years we've purchased other, more expensive, games specifically to play together as a family. But hose games didn't receive as much table time as this one during our daughter's preschool/kindergarten years.