We've all done it, right? Invested in a board game just to get our creative little hands on its components? Everyone's done that, right? It's not just me? (Please tell me it's not just me.)

See, sometimes a great game also comes with awesome little bits that are just frosting on the cake. Other times, a game's accessories turn out to be more compelling than the actual game itself. Those are the ones that usually end up just being gutted for parts.

In this episode, I’ll be sharing my list of the top ten games that I got first and foremost to use in modding other games or for creating entirely new ones. If the game itself was fun, then that was just an added bonus.

Let’s dredge some boxes for plastic inspiration, as I present a Pair of Dice Paradise Top Ten: The Top Ten Games For Component Harvesting.

At the tail end of my list is the Star Trek version of Settlers of Catan. 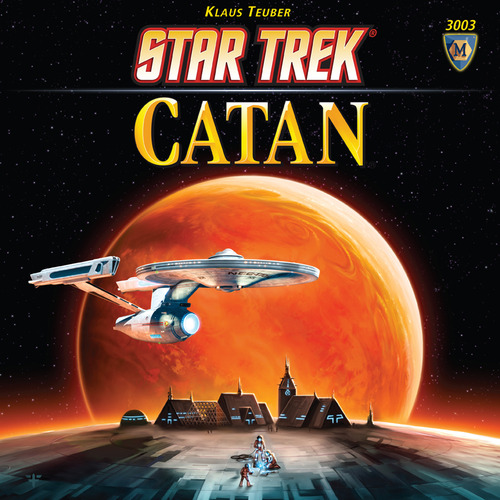 I recently started a new gaming group in my town that meets a couple times a month, and I needed a new copy of Settlers of Catan to bring to it. Sure, I could have gone with the original version of the game, but this one includes cool little Enterprises and space stations that I can use in other games.

This one comes in at the end of my list because it’s a game that I definitely will play, and I will use to introduce others to Settlers, but I admit that I passed by the original version for this one simply to get my hands on the little ships and satellites it came with. 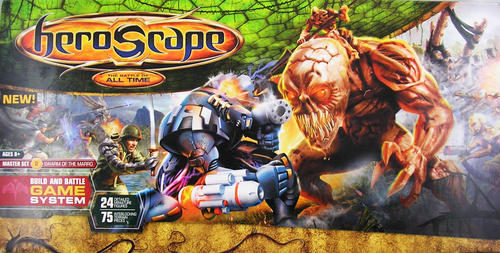 Heroscape is the duct tape of board games. Not only can its pieces be used to supplement other board and RPG games, but it's a good game in its own right. I can't wait until my six year old daughter is old enough to play it. I've had it packed up in boxes for years, just waiting for the glorious day that I introduce her to it. That day comes closer with every sunrise.

Until that day arrives, some Heroscape pieces are being assigned the task of supplementing other games. It’s pieces can currently be found on my gaming table sprucing up Defenders of the Realm, the Pathfinder Adventure Card Game and RPGs. Parts of the game that aren't currently being used to inject more theme into other games will remain boxed up at number nine on my list.

My wife is usually my companion for two-player games, but the rare, spare moments that we have to play games together are rarely long enough to indulge in this beauty. And most other gaming opportunities I have are in a group environment. I know that its day will come. But, until then, it’s fantastic figures, dice and map will continue to be used as a big sandbox for tinkering with other game design ideas.

Speaking of games that unfortunately see more time as a development sandbox than being played as originally intended: at number seven is Twilight Imperium. If playing this game was a car, I feel like I've only had the opportunity to roll it around the block a few times. It’s rare to have the time and number of players necessary to go full throttle and really take advantage of the immersive gameplay this baby is capable of.

In the meantime, Twilight Imperium has still offered me hours of enjoyment simply by the ideas and its pieces have given me to experiment with. The planet tiles, plastic ships, and cards, cards, cards, CARDS nearly make this a game design workshop in a box. It's a design dabbler’s wonderland.

I obtained War of the Ring and Twilight Imperium with the intention of playing them (playing the living snot out of them), and the quality of their components was just a bonus. By contrast, the next game on my list is here for the opposite reason.

When I discovered Crude, the part of my psyche that's addicted to polyurethane went nuts. Seriously, I think I had to be sedated. I started hunting for a copy, and after I eventually captured my quarry, I'm pretty sure I had to be sedated again. I'm not sure, my memories of that day are fuzzy due to the the horse tranquilizer. 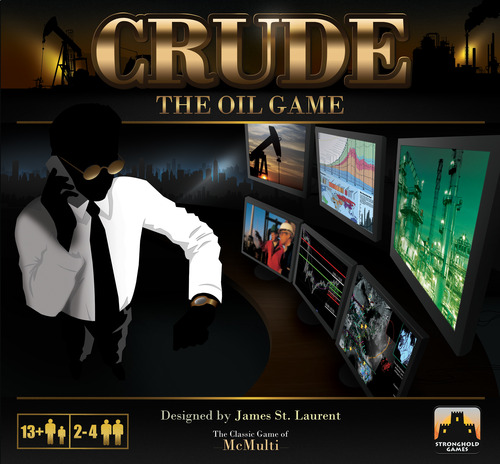 After obtaining a copy and then reviewing its rules as an afterthought, I discovered that there's actually a pretty good game included with all this plastic. Who’da thunk it? So, Crude earned its place on this list because it started out as a game just to be ransacked for parts, but it turned out to be a strong enough game that it earned the right to have its parts kept in its own box, so it could still be played as intended.

Hoopla, and several of the other Cranium games, are in my collection simply because of the five-color ten-sided dice that comes with them. (Little dice, oh, how I love you and the ideas for game mechanisms that you inspire.)

I've used this dice in many game ideas I've toyed with. I use them all the time. In fact, every time I'm at a garage sale, I'll snatch up any copy of Hoopla they have, just to get a hold of another one of these wonderful little pentagonal trapezohedrons. (Pen-tag-onal Trap-eh-zo-hee-drons)

Samurai Swords (now called Ikusa in its current printing) earns a spot at number four on my list because I never had any intention of buying it. In fact, I didn't even pay for my copy, I took it from a neighbor. (Breakin the law!)

See, there used to be a house on my block that would frequently put free things in their yard, out by the curb. Car parts, furniture, old clothes, all sorts of things would appear, always accompanied by a small, homemade sign reading, "FREE, please leave sign". (Apparently, so many people who would stop to take this person’s leftovers would also help themselves to the signage, that they had to add the specific request to leave the sign behind.) 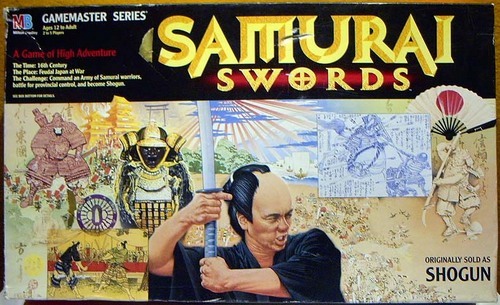 One day, as I passed by on my way to work, there was a Samurai Swords box in the free spot. I slammed on my brakes, leaped out of my vehicle, and greedily scooped it up like some sort of corrupted hobbit.

I expected to find a half-empty box full of well worn and abused pieces. But instead, I discovered a complete copy of the game in great condition. My free prize and I sped away with glee. (And I made sure to leave the sign.)

The first edition of Civilization was big on pieces, short on fun. After every game that I've attempted playing with anyone, my question of "when would you like to play this again?" has universally been responded to with, "never, and please leave now". Which is disturbing, especially when we're playing at my own house. 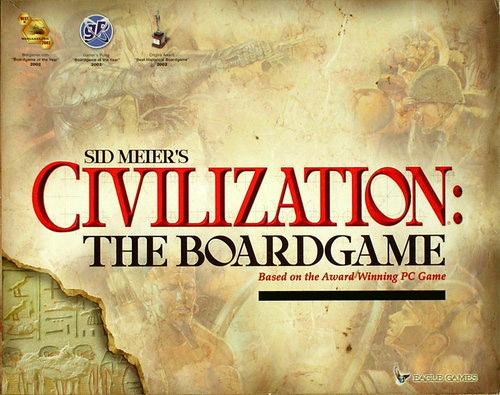 In fact, the number of pieces in this game are so plentiful and fun to tinker with that I've secretly coveted my friend's copy for over a decade. (Must... have... more... plastic...) Long have I been patiently waiting for the day that he's cleaning out his closet and decides to part with it. I'm looking at you, Yarb. (Call me!) 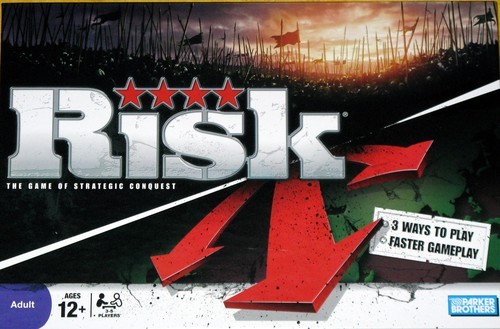 I grew up playing Risk. Many Saturdays were spent embarking on epic geo-political struggles that would consume the entire day. Risk doesn't seem to get a lot of love, ranking at #7,230 on boardgamegeek.com, just above "The T-Shirt Game".

Last year, Risk Legacy rekindled my craving for world domination. Risk Legacy was a change in the norm from other recent Risk iterations. The change being that I played for fun. There are many other versions of Risk that are tucked away in my closet -- Godstorm, Castle, Lord of The Rings, Starcraft, and a half-dozen copies picked up for a buck at thrift stores. The difference between these and Risk Legacy is that their primarily purpose is to lend their pieces to be pilfered and put into other places.

Even if these days I mostly keep Risk around just for salvage, it will always have a soft spot in my heart. (On a related note, if you eat the little soldier pieces when you're a kid, they'll get lodged in your chest, creating a soft spot in your heart.) 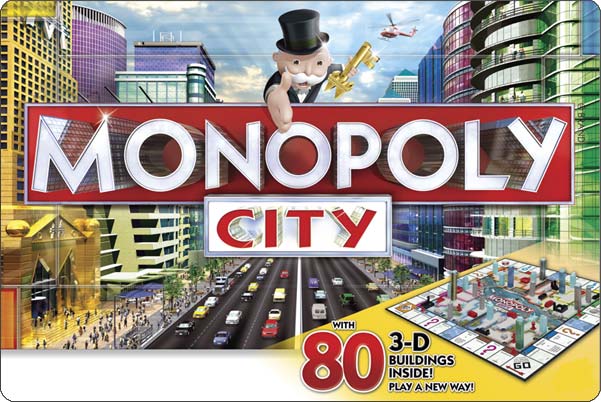 Monopoly City claims spot number one on my list because it epitomizes the concept of this list. This game comes with 80 little buildings: skyscrapers, schools, power plants, etc. Ooh, cool! Are these pieces used to add a city planning aspect into Monopoly with, injecting it with a new level of strategy?

Unfortunately not. When you get right down to it, it's still just Monopoly. Monopoly with more complicated rules. And that’s the problem with this game: Monopoly City doesn’t add complexity to the game experience, it adds complication to it.

I'd love to figure out how to integrate these little buildings into an actual city-building game, like  Suburbia. I haven't had an opportunity to do that yet, so, for now, these 80 little buildings just sit on my shelf, creating a tiny plastic skyline that whispers hints of game ideas at me.

So, that's my top ten games for harvesting components. Have you ever gotten a game with the intention of modding it or gutting it for parts, rather than playing it as intended? If so, let me know in either the YouTube comments, the Pair of Dice Paradise Facebook page, Google+ page, or right here on the website.

Until next time, I'm Chaz Marler, your Component Proponent.
Share this article: