We begin this episode with a confession: I suffer from Compulsive Component Condition. Victims of C.C.C. are  gluttons for game components. You see, if a game is full of lavish artwork, thick cardboard and fancy tokens, then it's inevitably going to end up it in my collection. Even mediocre games with lots of molded plastic pieces will tempt me.

Monopoly City: The Siren Song for the Component Compulsive

And that's what this series is about; reviewing the pieces, cards and iconography that make up great — and sometimes not so great — games; and upgrading games with lackluster parts to make them more immersive. So join me as Pair of Dice Paradise presents this new series: The Component Proponent.

Let's talk about the coin conundrum. The paper coins that come with great games like Libertalia and Lords of Waterdeep are actually quite nice. But, come on, if you're going to play a game with art and craftsmanship already as good as what else is in these games, then let's not stop at the coins. Let's up the ante. (Heh, heh, "coins", "up the ante", I see what you did there. ... Okay, let's move on.) 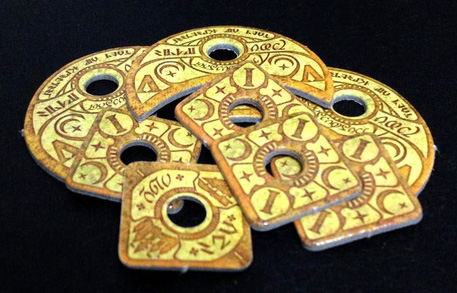 Sample coins from Lords of Waterdeep. Some of the best paper coins I've ever seen... they're still just paper though.

This article will review several suggestions for upgrading the paper coins that come with many games. Each suggestion will be evaluated on the following:

1. Thematic Immersion
How much does a particular component make you feel like a swashbuckling pirate or a Lord O' Waterdeep? How much does it draw you into the world of the game?

2. Quality & Options
What's the quality of the component itself, will it fall apart after thirty minutes of gentle play? And what variations are available?

3. Price & Value
And finally, a combination of price and its value. Is it cheap, but cheaply made? Is it expensive, but still cheaply made?

And finally, I'll compare how many you could buy online with a budget of $100.

Alright, so there's how I'll be making my comparisons. Now, let's take a look at each one, then I'll sum up with my final thoughts.

Let's start with one of the most commonly found alternatives to paper coins: poker chips. One advantage of poker chips is their availability. They're available everywhere. Let's see how these poker chips stack up. 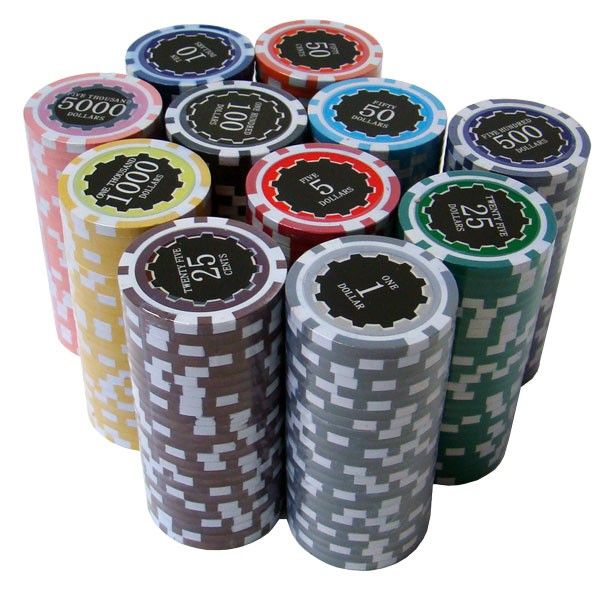 My poker chip of choice, the "Eclipse" line.

Thematic Immersion
The primary downside to using poker chips is that they sacrifice theme for convenience. Somehow, swashbuckling your way across seven seas for a handful Vegas clay doesn't seem particularly thematic. Instead, I prefer using them as victory points in other games, such as Seasons, Crude or even Small World. But, as a proxy for gold coins? Not so much.

Quality & Options
An advantage of poker chips is the variety of sizes, colors, materials and denominations that are available. For this review, I'm going to use my chip of choice, the "Eclipse" line. They're a mid-range chip. They're clay, as opposed to plastic or ceramic.

They have a sticker decal (the graphics aren't printed directly on the chip material) and I believe they have a metal slug in the center. The clay gives them a weight of 14 grams, meaning they have a very satisfying, intimidating "clunk" when you drop them down on the table.

During my research, I read some complaints of the occasional chip with a misaligned decal. Out of several hundred of these chips, I've only encountered one or two that have a decal that's off-center enough to bother me. So, that hasn't really been that big of a problem.

Price & Value
Clay poker chips can run over a dollar a piece! The Eclipse line is fairly common (many poker supply websites have them) and available as low as 8¢ a piece.

So, how many can we get online with a $100 budget? At 8¢ a piece, you may be thinking that you can get 1,250 chips. Ah, but, unfortunately there's a catch: shipping. At 14 grams per chip, their weight adds up, and quickly. Expect the shipping expenses to take up half your budget. After taking shipping into consideration, $100 will buy you 600 chips, averaging out to about 16.5¢ a piece.

So, if poker chips aren't thematic enough for you, the next suggestion may be...

A variety of plastic coins are available. One brand that I found during my research was by "The BT Group". I don't personally own any of their plastic coins (*sigh* yet). So, what I'm about to tell you may be even bigger lies than usual, I guess.

Thematic Immersion
If we're talking about games in a fantasy setting, then these will likely scratch that itch better than poker chips. But, there's just something about the lightweight, pressed plastic coin feel that I just leaves me wanting.

On the other hand, the light weight can be a plus. You know how labor intensive it can be to lug around 18 1/2 pounds of poker chips? When you're forcing a six-year-old to load all your games in your car, that's like two or three separate trips for them!

pro tip
Plastic coins are substantially easier than poker chips for a toddler to tote.

Quality & Options
The plastic coins in this example come in both gold and silver versions, providing the option of two denominations.
Since I don't have any in my possession, I'll need to refer to the comments on this product that were posted on the website, which, run ranged from "Loved it" and "Unbeatable" to "horrendous" and "the paint peels off".

With such mixed reviews? Are they worth trying out?

Price & Value
These coins are the most affordable option on my list. I located a pack of $100 online for $6. Even taking shipping into consideration, a $100 budget could still buy 1,500 coins. That's 6.5¢ a piece. Very affordable.

So, if the plastic coins are more thematic, but not high enough quality for you, then the next candidate may be a solution: 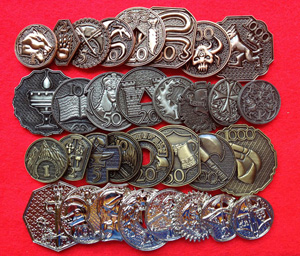 Campaign Coins: For those not afraid of awesome.

Thematic Immersion
No flimsy plastic or paint to peel off with these. Each type and denomination of coin has a unique design and shape. If you're looking for a component to upgrade a fantasy game, it doesn't get much more immersive than this.

Quality & Options
The Campaign Coins website mentions the 3D detail of their coins, and details such as raised areas and an antique finish. The coins are about the size of a US quarter. They go on to mention, "It is our goal to make our coins as authentic as possible, so that the money in your hand is exactly the same as the money in the game world." Oh, I believe you, King Of The Castle Games Company, I believe you.

Price & Value
I am going to have to take their word about the quality, because I've had their website bookmarked for two years, and regularly return to it to consider buying some, but I just haven't been able to bring myself to do it. Why? Because of the price.

With shipping, our sample $100 budget could buy 110 coins, which is 91¢ a piece. Nearly a dollar per coin for play money? I just haven't been able to bring myself to do it. A friend of mine put it best when they looked at the coins, looked at the price, then looked at me and asked, "at that point, why don't you just use real money?" Hmm, real money? Indeed.

Alrighty, so, if poker chips aren't thematic enough, plastic coins don't have high enough quality, and Campaign Coins are too expensive, what other options are there? The answer came to me one day after I passed a bottle return machine that dispensed $1 coins as change. 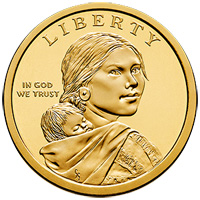 Thematic Immersion
The reason I don't use nickels, dimes and quarters is because they're money. They're so common as money that, when using them, I can't achieve that suspension of disbelief. But — at least to me — the US $1 coin is actually so rarely seen in circulation that it doesn't distract. In fact, before considering them as game components I'd never actually encountered one in the wild!

Quality & Options
So, if you're able to suspend your disbelief with them, then I think they play the part of authentic gold little coins pretty well because, well, that's what they actually are: gold coins.

Also, back in 2007, the US mint started releasing several new coin designs each year based on the presidents. Starting with Washington and working their way through history a few presidents at a time. So, that not only helps add to their variety, but if having the faces of some dead political leaders on your coins helps with the theme, that's a nice little bonus.

Price & Value
So how about price? With a $100 budget, you could get 85 of them online, after shipping costs. That's $1.17 per coin. Yeah, the government will sell you money for a higher price than its actual value. (I'm really in the wrong line of work.)

So, the price is kind of ridiculous. However, if you get them in your change, or from your local bank, then you can rationalize to yourself that they're technically free. Because one of the best thing about using these $1 coins as a game component is that they can be liquidated. If the need ever arises, you can simply use them as money because, well, they are money. (Try paying for a cheeseburger with poker chips. Take it from me, that hardly ever works.)

I will point out one downside to using $1 coins as a game component: because of their value, you're probably not going to use them with every gaming group. Nobody wants to come home from a gaming convention to discover that fifty bucks worth of legitimate currency has found its way home with the other players. So, even with a cool factor this high, I'm still pretty discerning about who I bring these out to the table with.

So there you have it. Four suggestions for upgrades to the common paper coins used by many games. Hopefully, one of these suggestions will work for you, or at least give you your own ideas of how you can add another layer of quality and immersion to many of the the great games we love to play.

If you have any other ideas, please let me know! I'd love try them out, if for no other reason than as an excuse to get more fiddly bits for my own collection. So, until next time, I'm Chaz Marler, your Component Proponent.
Share this article: