Board game reviews, news and commentary.
Pair of Dice Paradise
Boardgame Day #2 in Creswell
Events
Updated: Sunday, Sep 1, 2013
Alright! This was the second board gaming event that I hosted at the Creswell Community Center in Creswell, Oregon, and I'm happy to say that attendance was way up!

The number of participants increased from one up to five. And, everyone that RSVP'd actually showed up. Not a single no-show. Not too shabby for just the second gaming event.

I brought lots of games from my collection again, and we ended up playing Wits & Wagers, King of Tokyo and Survive: Escape From Atlantis.

Here's some pics of the games in progress: 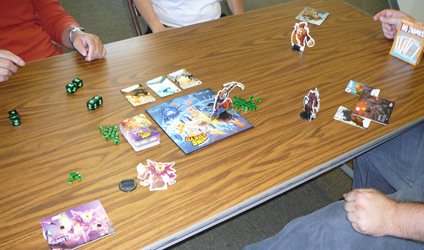 King of Tokyo was a big hit today, with at least four games played. In this game Cyber Bunny was eliminated early, giving him plenty of time to snap a picture and re-evaluate his strategy before the next game. 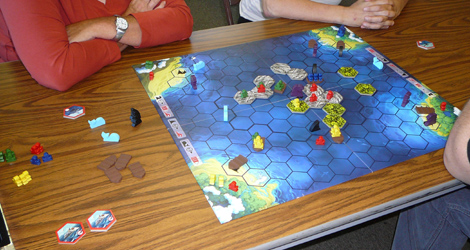 After leaving Tokyo in ruins, we moved on to sinking Atlantis in "Survive". If you look closely at this picture, you can juuuust barely make out me not winning.

Now to see if I can keep this good thing going. We'll see how the next board game day goes...


Upcoming Events
More upcoming events are available on the aptly named Events page and on the Pair of Dice Paradise meetup page. Join up and come play!
Share this article: