Our five previous participants attended again, which I'll take as a good sign that everyone enjoyed themselves last time. Everyone seemed to have fun this time as well, and we're all starting to become comfortable enough around each other that there was some playful taunting as we played. In fact, I only rage quit and flipped the table twice this time (down from my usual every-fifteen-minutes), and I think everyone noticed the extra effort I put in to my self control.

All kidding aside, it was a great time. Now I just need to work on getting more gamers to participate! 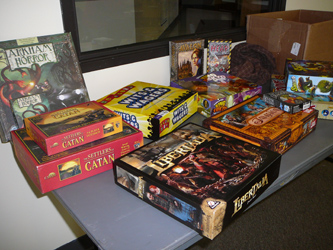 Sooo many games to play. Which ones will make the cut this time? 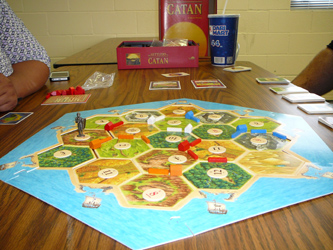 A shot early in a game of Settlers of Catan that would eventually bear witness to an Ore monopoly, the Great Brick Robber Conspiracy, and wheat more precious than gold. 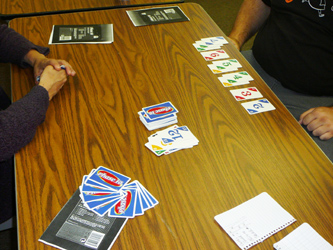 I was introduced to Phase 10, and some interesting variations on how to manage your hand of card. Even with all the options presented to me, I still managed to lose stunningly. 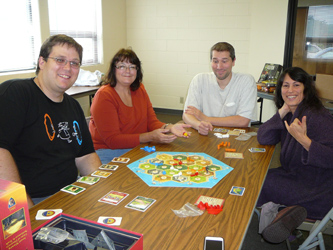 Embarking on an epic, three-hour game of Settlers of Catan. Strangely, during that entire game, a 7 was rolled (moving the robber) only THREE times. I've never seen anything quite like it, and I once spent a month at Catan Camp.
Upcoming Events
More upcoming events are available on the aptly named Events page and on the Pair of Dice Paradise meetup page. Join up and come play!
Share this article: